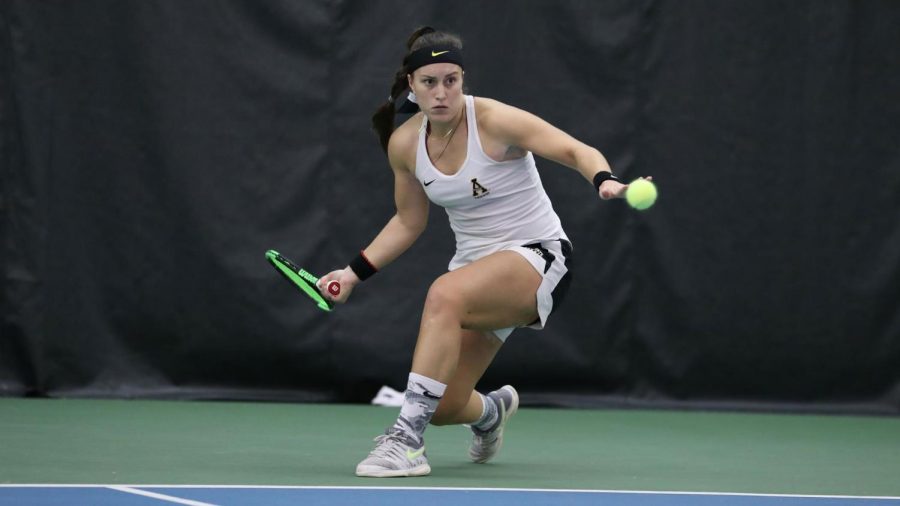 Junior Teodora Sevo in action during a match last year. Sevo and the Mountaineers look to build off of what they accomplished a season ago.

The 2019 season for App State women’s tennis was filled with success. The Mountaineers finished with an overall record of 15-6 and a conference record of 9-1. This gave them their first regular season Sun Belt conference championship in school history and the No. 1 seed in the conference tournament. However, their run was cut short in the first round when No. 8 seed Georgia Southern upset them 4-3.

“Yeah, we had a good season,” junior Teodora Sevo said. “Everyone was kind of on the same page, and we went to the tournament with the same mentality, and then it just slipped out of our hands. We did our best for sure.”

After as much success as the team had, the tournament loss was a hard way for the season to come to an end.

“It was a tough match, (Georgia Southern) played great, and we didn’t have a good day,” junior Maria Zacarias said. “But, when you realize it’s done, and you’re not going to play a match until January next year it’s like, ‘woah.’ That was hard.”

This season, the Mountaineers have a new look with four players seeing action for the first time. Although there are new faces, Zacarias said the goal is still the same.

“We have a lot of new people, we have four new players on the team, so since the fall, everything’s a little bit different because they are new, and they are adapting to this,”  Zacarias said. “It’s just one match at a time, work hard, but our goal … is to just get to April; that’s when the tournament is.”

Returners like Sevo and Zacarias will play an instrumental role in making 2020 successful. The veterans on the team remember last year’s success, and are determined to have a more positive outcome at this year’s Sun Belt tournament.

“Coming into the fall and the spring, the returning (players) were thinking about what it’s going to take for us to play better (at) the conference tournament,” Zacarias said. “All the matches are to be ready for that tournament, so it was really shocking, but it was also like we wanted to do something better this time.”

If the Mountaineers take care of business and win the Sun Belt tournament, they would get an automatic bid to the NCAA tournament and a shot at the best teams in the country.

“Last season, we started a little bit off, and we built from there, and we got there really good, but things happen,” Zacarias said. “Right now, we know that we have to work really hard since day one if we want to get ready for the tournament.”

This team believes that if each player puts forth the effort, they will achieve their season goals.

“It’s really hard practicing at 6 a.m., so this is more for our team,” Sevo said. “For everyone to be disciplined and organized with the time and school and going to sleep early, just being ready to give your maximum every day because otherwise, we won’t be where we want to be.”