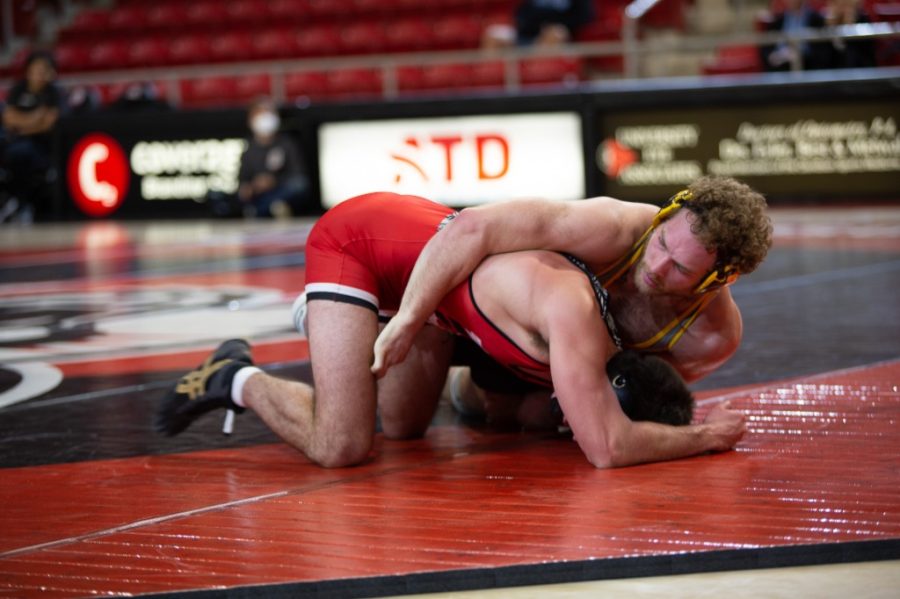 App State wrestling wrapped up its regular season with a pair of dominant Southern Conference dual victories. The Mountaineers cruised past Davidson College 34-6 Friday to clinch the SoCon regular-season championship. They then shutout Presbyterian College 46-0 Sunday to finish undefeated in conference competition this season.

The Mountaineers won their first seven matches Friday, as redshirt sophomore Caleb Smith started action with a 6-0 victory following a second-period pinfall in the 125-pound match.

No. 20 redshirt junior Will Formato rode out the third period in the 165-pound match to secure a 2-0 decision before super senior Thomas Flitz won the 174-pound match with a 10-2 major decision, increasing the Mountaineers’ lead to 28-0.

Davidson put points on the board after two close victories, as redshirt sophomore Brett Mordecai fell 5-3 in the 184-pound match and freshman Wyatt Miller fell 3-2 in the 197-pound match, but redshirt junior Michael Burchell secured a pin in the final match to solidify the Mountaineers’ victory.

App State improved to 8-2 overall and 6-0 in their conference this season, becoming conference champions for the fifth time in the past seven seasons. Head coach JohnMark Bentley praised his team for executing when the top seed was on the line.

“It was really big for us to clinch a conference title,“ Bentley said. “That’s what was riding on this match tonight was to try to finish up and secure the outright conference championship, so I’m obviously proud of our guys for that.”

The Mountaineers finish the regular season with a perfect conference record for the third time in six seasons. Bentley’s focus quickly shifts toward making sure his team is prepared for the conference tournament.

“We’ll have a good training cycle this coming week,” Bentley said. “All eyes will be on getting sharp, making sure our guys are feeling good and getting that extra work in so we can go to the conference tournament, be aggressive and score points.”

The SoCon Tournament begins March 5 at the Holmes Convocation Center.