Wrestling grapples to stay in Top 25 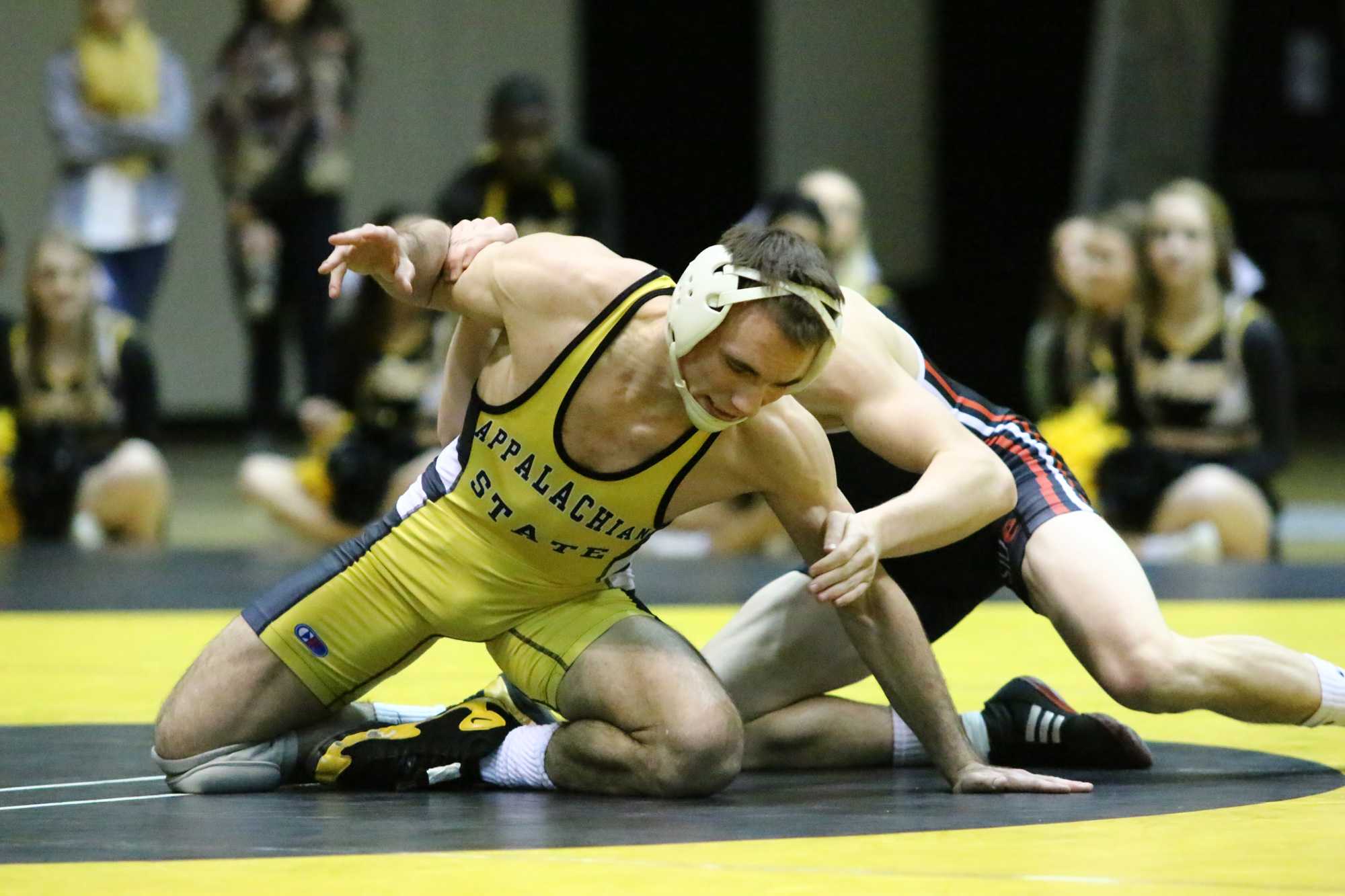 Correction: At the time the story was written, the wrestling team was still a member of the USA Today/NWCA top-25, but was no longer in the top-25 at the time it was published. The story has been updated to reflect the correct information.

The Mountaineers are refusing to leave the national spotlight easily, after the wrestling team lost hold on to the last spot in the Top-25 of the USA Today/NWCA poll after holding the mark for multiple weeks in a row.  The stretch marked the first time, outside of football, that App State (9-3, 4-1 SoCon) had been ranked in a major national poll since baseball in May 2012.

It’s been wrestling’s turn and some of their success can be attributed to a 6-foot-2 inch, 262 pound junior named Denzel Dejournette. Dejournette, who has been named SoCon wrestler of the week three times so far this season and SoCon wrestling athlete of the month for November, said his confidence has been high and having two years of experience under his belt already has helped enormously.

When asked what was different about this year’s team compared to others, the answer was team morale.

“Negativity spreads like a cancer,” Dejournette said. “We’ve got all of the bad seeds out and everybody’s bought in.”

The “buying in” process is crucial for this team, which features no seniors on the mat.

Head coach JohnMark Bentley keyed in on how it has really forced guys like Dejournette and junior Vito Pasone to step up and take the place of seniors to lead this group.

“Vito and Denzel’s leadership, along with some other guys, have really helped bring some of the young guys along,” Bentley said.

He went on to say, however, that the team’s relative inexperience doesn’t change its focus.

“Our goals are always the same … we’re trying to win titles, get All-Americans and be a Top-25 team in the country consistently,” Bentley said.

Being ranked in the top-25 for such a stretch, Bentley says, is a testament to all of the hard work the team has put in together. Before Jan. 26, the Apps had won their last six matches in a row against Duke and Campbell, among others. Other than an unfortunate 22-18 loss to Gardner-Webb, the only other teams the Mountaineers have fallen to were No. 3 NC State and No. 14 UNC at Chapel Hill.

“It doesn’t define who we are as a team and we’ll really show how much character and heart we have when we come back and win a share of conference,” Pasone said following the loss to Gardner-Webb.

Pasone emphasized being prepared and having no regrets looking back on the season.

“At the end of the day you’ve got to look in the mirror and ask, ‘Are you happy with where you’re at?’” he said.

Pasone and Dejournette both agreed that the chemistry on the team is the best they have ever been a part of.

“We’re definitely family, we have our quarrels like all families, but we’re brothers,” Pasone said.

Bentley later brought up concerns of staying healthy the rest of the season considering they haven’t had their full lineup since they played Duke.

“It’s about being healthy and our best in March, not about being our best in January,” Bentley said. “We’re never happy with a loss but hopefully we learn something and can come back better, more fired up and hungry because of it.”

The Mountaineers travel to face Chattanooga on Friday to take on their SoCon rivals, the Mocs, who are currently undefeated in conference.