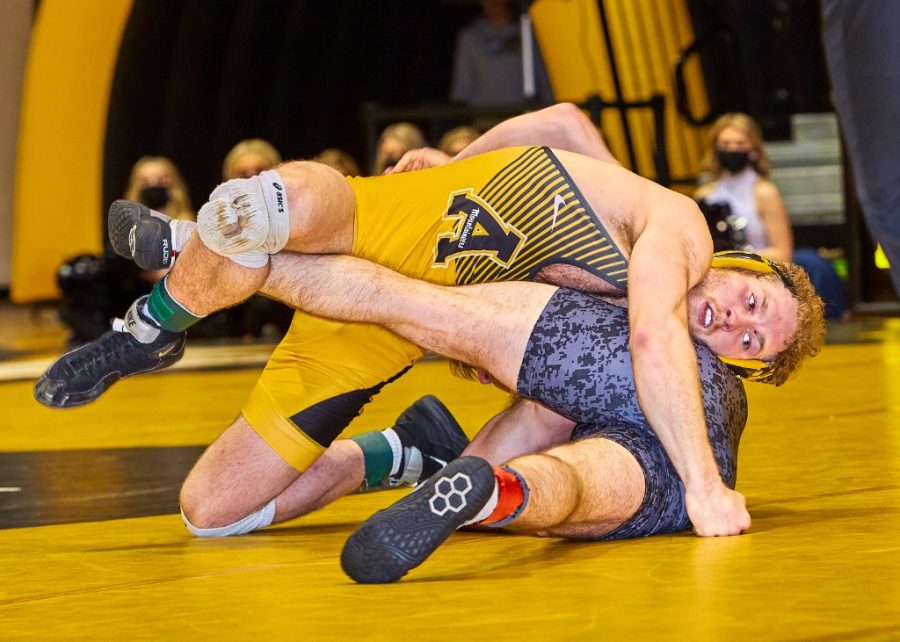 “The whole match kind of felt like the momentum was going against us,” Bentley said. “I couldn’t be more proud of Mike Burchell, with the team depending on him, going out there and putting the team on his back.”

Redshirt sophomore Caleb Smith, ranked No. 22 in his weight class nationally, opened the day in the 125-pound matchup with a 3-1 lead heading into the third period but fell 4-3 in a close loss after giving up a takedown.

In the 133-pound match, No. 25 super senior Codi Russell entered the third period with a scoreless tie but gave up a takedown with four seconds left to fall 2-1 in another close contest.

Sophomore Heath Gonyer wrestled the 141-pound match and entered the third period with a 2-2 tie. With just over a minute left, Gonyer’s tie-breaking takedown secured a 4-2 decision and the Mountaineers’ first victory of the day.

No. 5 redshirt senior Jonathan Millner, January’s SoCon Wrestler of the Month, picked up a 4-1 decision in the 149-pound matchup and tied the match at 6-6.

In the 157-pound match, redshirt senior Cody Bond erased a 6-0 deficit and a 7-7 third period tie with near fall points, winning 12-7 and giving the Mountaineers the lead. Redshirt junior Will Formato fell 4-2 in overtime in the 165-pound match after giving up a takedown with four seconds left, sending the match to a 9-9 tie.

No. 26 super senior Thomas Flitz won a 9-3 decision in the 174-pound match to give the Mountaineers the lead, before redshirt junior Barrett Blakely fell 4-2 in overtime in the 184-pound matchup, allowing the Mocs to tie the match.

In the final match of the day, 285-pound Michael Burchell faced a 2-1 deficit in the second period.

When the Mountaineers needed it most, Burchell picked up the first pin of the night in the third period, tallying six points and securing an 18-16 victory for App State.

“I knew what was at stake, and I knew what I had to do,” Burchell said. “It was definitely a lot of pressure on me, but I’ve gotten used to it throughout the years, and it felt good to put the match away and get a win for the team.”

The Mountaineers now prepare for the final month of regular season competition. Bentley expressed that in order to maintain a championship-winning culture, executing in crucial moments is a top priority of his.

“I don’t take this win for granted,” Bentley said. “Anything that could go wrong did go wrong, but that’s what winning championships is all about.”

App State looks to continue its perfect SoCon record as they return to Varsity Gym Sunday in a conference match against Campbell.