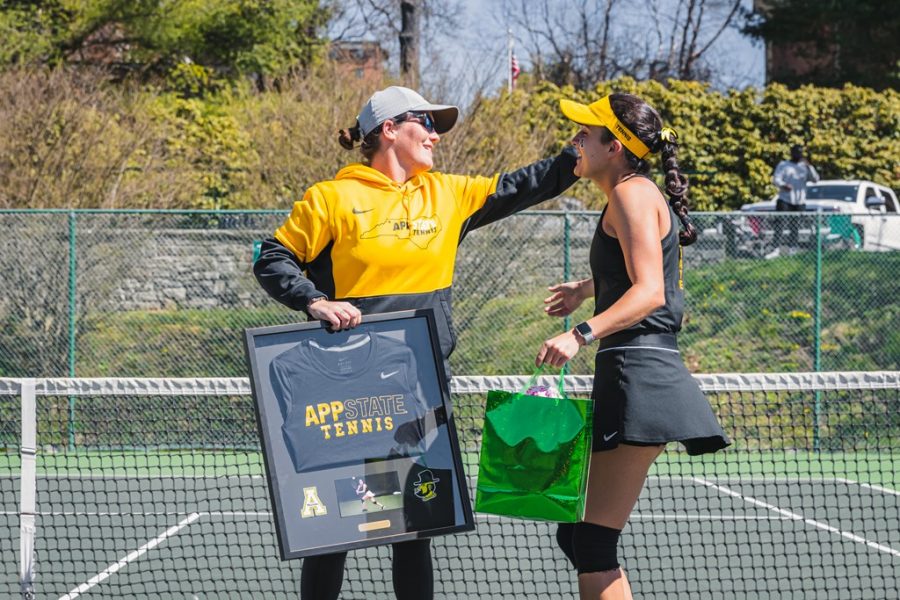 Over her last four seasons in Boone, senior María José Zacarias has cemented her legacy with the App State women’s tennis program. This year, as a tenured senior leader, she posted a league-high 10 wins in doubles action, and heading into the postseason, won her last four singles matches.

Coming to Boone from San Luis Potosi, Mexico, she rose to the top of the team’s rotation early on. During her freshman campaign, she went 8-1 over a nine-match stretch, finishing 8-5 and earning her second team All-Sun Belt singles honors.

She succeeded in her 2018-19 sophomore season as the Mountaineers compiled a 15-6 record and won their first regular season Sun Belt Championship with a 9-1 league mark.

In the 2019-20 season, Zacarias led the team in both doubles and singles victories. The Mountaineers sat at 6-4, and hoped to clinch their second straight winning season before the season was canceled because of COVID-19.

“We were about to start conference play, we had been working really hard for that, and we were just very disappointed,”  Zacarias said. “There were also a lot of emotions because two of our teammates were going to transfer, so it was sad to know that we wouldn’t play next to them anymore.”

While the Mountaineers lost two players to transfer, they brought in freshmen Ksenia Aleshina and Peri Tippins. As a doubles tandem, Zacarias and Aleshina match the team of teammates Sandra Anglesjö and Helena Jansen with 10 wins and only three losses.

Most recently, on April 11 against Davidson, the senior and freshman duo won their seventh of the last eight matches.

Zacarias says she understands how to fill her role as a leader for the team, especially for incoming players, such as Aleshina.

“I did feel that I had the responsibility of showing them how we work as a team and how we like to represent the school,”  Zacarias said. “I think I’m more of a silent leader. I like to have a good work ethic and lead as an example, but I have good teammates.”

An All-American and national champion as a student athlete at Vanderbilt, Antal provides the Mountaineers an advantage in experience. Zacarias remarked about their shared passion for and experience with the game of tennis.

“It’s been great, she’s a really good person, and she’s really passionate about tennis,” Zacarias said. “I think that me sharing that with her has been able to help me work hard for her and play for her.”

Under Antal, Zacarias has found success in both singles and doubles action, finishing 7-7 in singles play, while posting a 4-2 record against Sun Belt competition.

She was named Sun Belt Women’s Tennis Player of the Week on April 7 after finishing 3-0 in doubles and 2-0 in singles as the No. 1 against UNC Greensboro, Troy and South Alabama.

After winning three straight matches, she capped the regular season off with a 6-2, 6-7 (5-7), 6-4 victory against Davidson’s Josie Schaffer.

Zacarias hoped to keep her momentum going into the Sun Belt Conference Championship, while motivating her teammates to play their best possible tennis.

“I think we have a good opportunity to show everything we’ve worked for,”  Zacarias said. “For me, I’m just trying to give everything I have left because it’s my last tournament as a Mountaineer.”

As the fourth seed in the East, the Mountaineers fell to No. 5W seed Texas State, 4-1, in the Opening Round of the Sun Belt Championships held in Peachtree City, Ga.