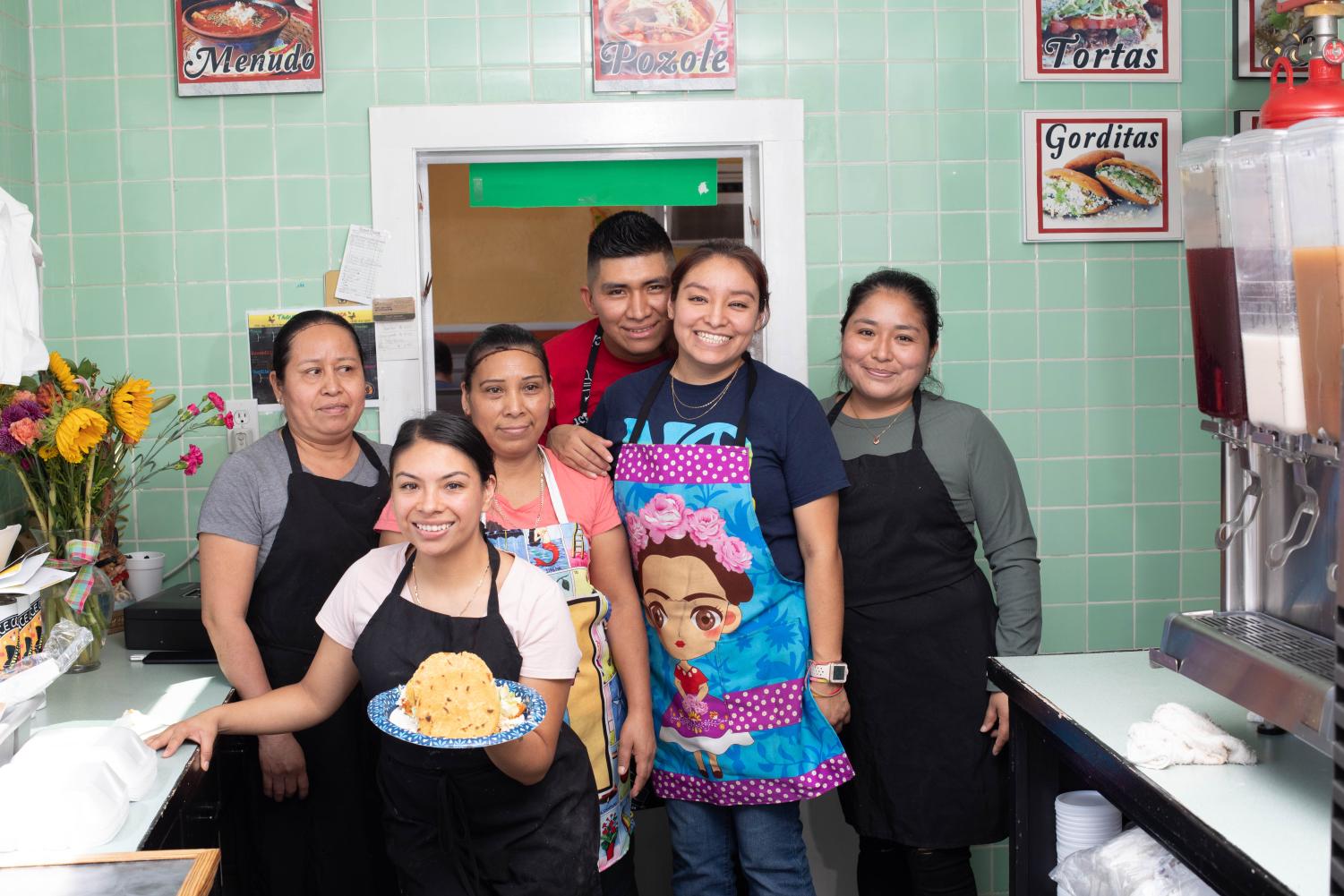 Miriam Hernandez and her team at Taqueria La Monarca posing for a group photo. Miriam holds gorditas in her hand, a popular Mexican dish. (Justin Hernandez)

Miriam Hernandez and her team at Taqueria La Monarca posing for a group photo. Miriam holds gorditas in her hand, a popular Mexican dish.

Stories of the Hispanic community of Boone

ispanic Heritage Month, held Sept. 15 – Oct. 15, is dedicated to celebrating Hispanic/Latine culture, history, accomplishments and more. In Boone, the Hispanic/Latine community makes up about 5% of the Boone population, according to the United States Census Bureau.

Although a small percentage, this community has brought their Hispanic/Latine heritage to the High Country, whether it be through food, music or cultural customs. From families to business owners, to faculty, staff and students, these are some of their experiences living in a predominantly white town.

Throughout Boone, there are numerous Hispanic/Latine owned businesses, the majority of which are family owned.

Taqueria La Monarca located at 2530 U.S. Hwy 421 N, is a restaurant run by a mother and daughter duo, and is one of the newest Hispanic-run businesses in Boone. Veronica Ramos, a cook at La Monarca, cutting open a gorditas to get it ready to be stuffed with meat, lettuce and cheese. Photo by Justin Hernandez.

The restaurant offers food such as tacos, burritos, tamales and quesadillas, as well as desserts such as ice cream and snacks such as mangonadas, a sweet and savory Mexican snack that mixes frozen mango puree with mango slices and chili seasoning.

Hernandez said growing a Hispanic business in a predominantly white town has been a learning experience. She said learning what non-Hispanic customers like influences what goes on and off the menu. However, Hernandez said they still make sure the menu offers Hispanic foods they enjoy. 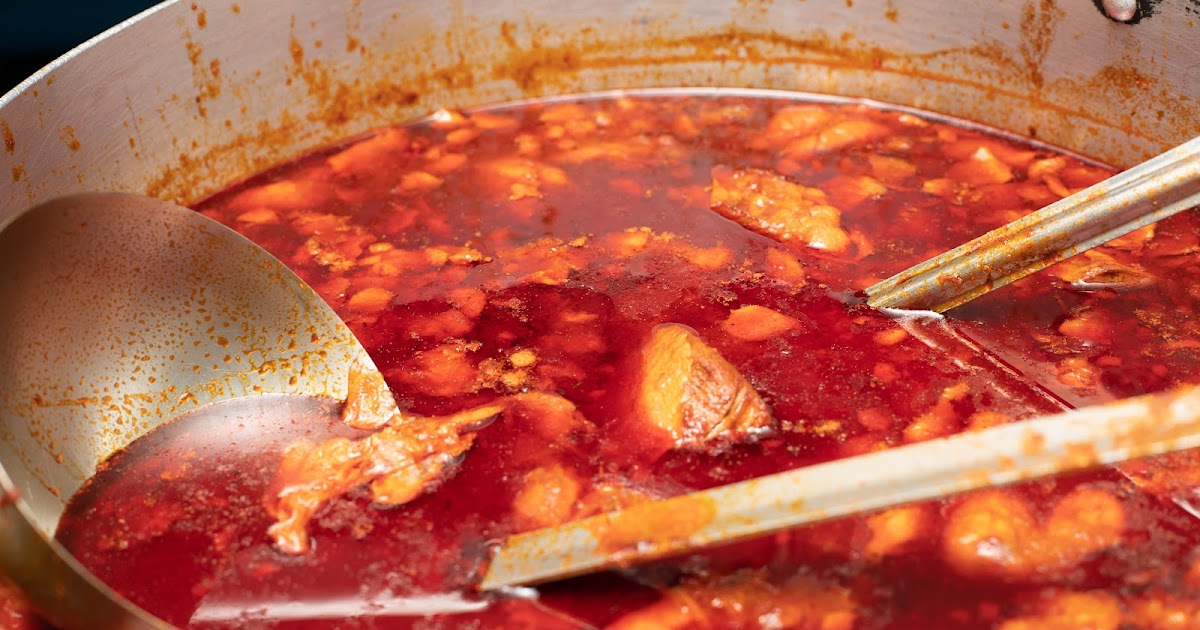 Although Hernandez and her family have lived in Boone since 2003, she said she is very proud of her heritage and said the restaurant is a way to connect to her roots.

“We’re just bringing a little piece of our Hispanic culture to the United States,” Hernandez said.

Raquel Cervantes, Hernandez’s mother, said Boone provides a lot of opportunities for the Hispanic community, and they appreciate all the opportunities and help they’ve been given, as well as their customers. 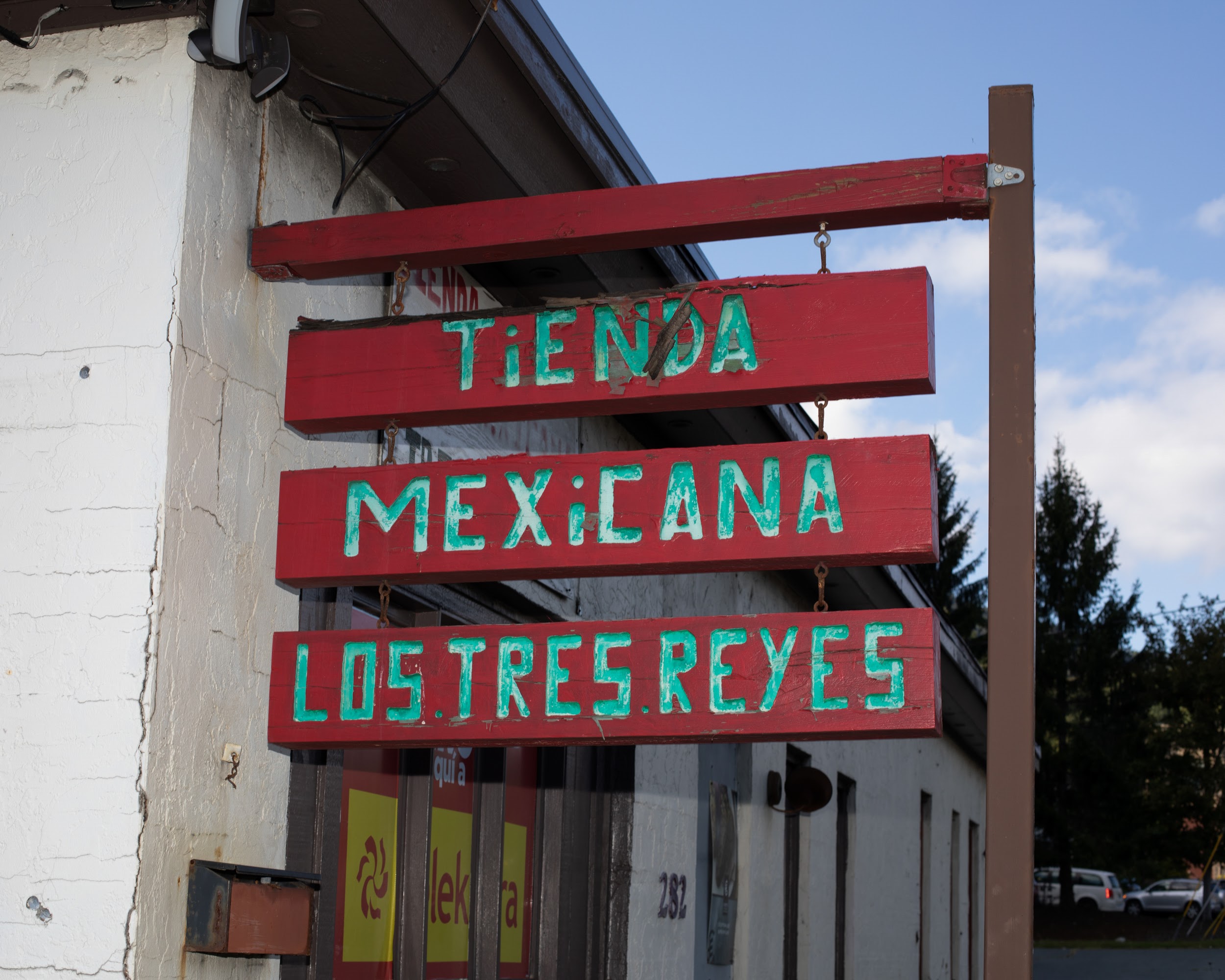 The store sign of Los Tres Reyes, a family-owned tienda Mexicana found on the 105 extension. Photo by Justin Hernandez.

The market offers a variety of Mexican and Central American staple foods, snacks, fresh cheeses, meats and produce. The business also sells indigenous handicrafts they buy directly from native vendors in Mexico, such as beaded and woven jewelry, traditional and religious symbols like the sombrero, rosarios and more.

The business offers its customers a variety of services, from money transfers to package deliveries across Mexico and Central America, locals can come to run all their errands in one place.

The couple offers advice to Hispanics wanting to move to the area, and have donated piñatas and sweet bread to App State on several occasions for events. They often donate food to homeless shelters in the Boone area. Community and kindness are two qualities they said they find important. 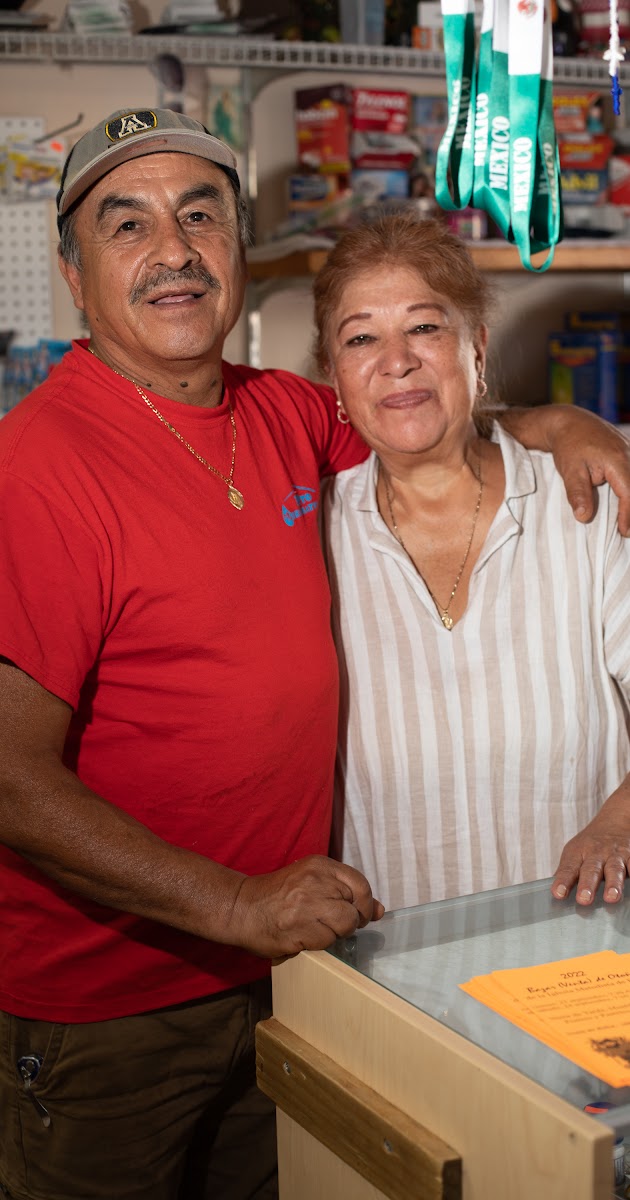 “We at a certain point try to help,” Arellano said. “There are Hispanic Americans there. Everything is there.”

Arellano mentioned that when coming to the area he found the Boone community to be “friendly.”

Originally from Mexico City, the couple worked in construction, farming and textiles before owning the market. They said they are thankful to the local community for supporting Los Tres Reyes for nearly two decades.

The family said they believe communities shouldn’t be selfish, and that instead, the community should aim to help each other rather than compete.

Marcelino Bonilla, owner of Santa Lucia, another local market, wants people to know that “in the United States, one comes to work and fight and get ahead, more than anything.” 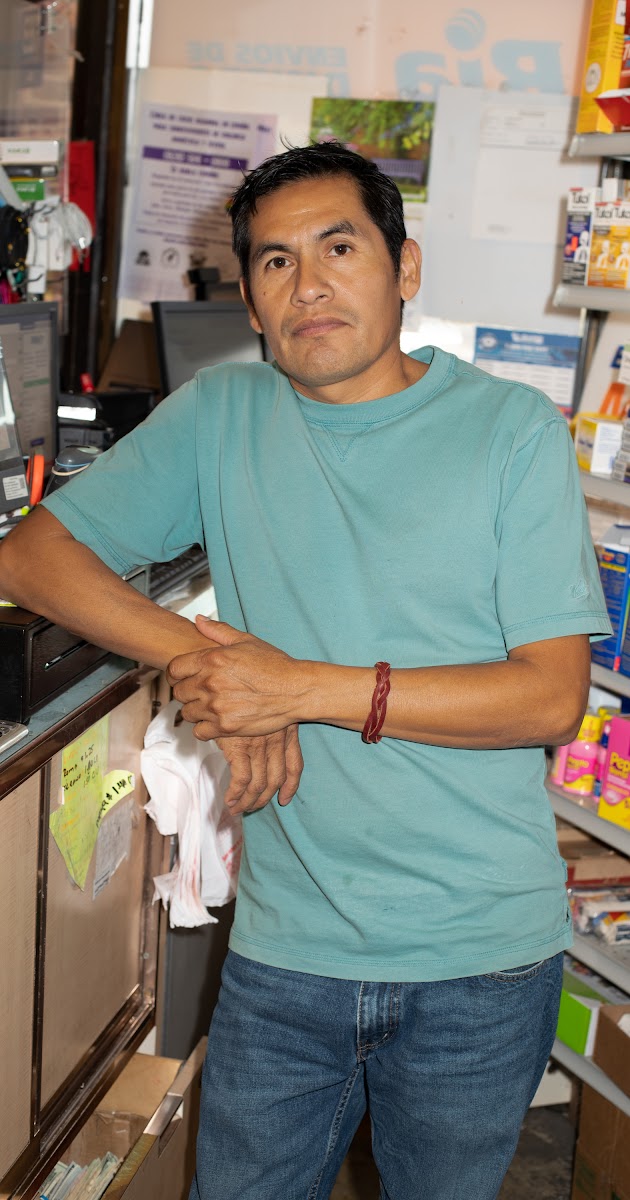 Marcelino Bonilla poses for a portrait in his store Santa Lucia, one of the tiendas Mexicana in Boone. Photo by Justin Hernandez.

Bonilla said he also wants aspiring Hispanic entrepreneurs to “lose your fears and take that step that you want.”

Melanie’s Antojitos is a local fruit bar located at 196 Boone Heights Drive. The owner, Edson Mendez, said they’ve been in business since March. The name was inspired by Mendes’ 1-year-old daughter named Melanie.

Mendez said the reason they started the business was because he and his family would have to travel over an hour in order to get some of the Mexican snacks they now sell.

“I just wanted to bring it back closer to home rather than, you know, going elsewhere far,” Mendez said.

The Hispanic/Latine population represents 8% of the student population at App State. This makes it the largest of all the racially/ethnically underrepresented student groups according to an email sent out by Chief Diversity Officer Jamie Parson. The population has increased by 123% since fall 2014.

Juan Berrocales is a Puerto Rican senior at App State, having moved to North Carolina from Puerto Rico eight years ago.

Berrocales said his experience at a predominantly white institution has been “interesting to say the least.” He said there have been a lot of cultural differences he’s faced since moving to North Carolina.

“Every day there is some type of reminder that I’m not necessarily from here,” Berrocales said. “Like I’m a stranger.”

To stay connected with his culture, Berrocales said he cooks and goes to places where he can speak Spanish, such as some of the local Mexican restaurants.

Berrocales also said finding and connecting with the Hispanic community in Boone has been a bit difficult. He said one has to “dig through to find it.”

“I think stuff like that really brings people together to just express themselves and be part of their community,” Berrocales said. “And be comfortable doing so.”

Berrocales has also created a name for himself in the Hispanic community by starting a music career. He began in 2017 and got “hooked” on making music, specializing in reggaeton and Latin rap. His artist name is Cales, and he has music on platforms such as Spotify and Apple Music.

Carlos Ruiz is another student who has made a name for himself in the university’s Hispanic community. Ruiz, an App State senior, is the vice president of LHA and is of Mexican descent.

Ruiz said he carries his ethnic heritage with pride. He said he tries to show off and be a part of his culture as much as possible, especially in Boone, where there are “small pockets” of it “here and there.”

Ruiz said he tries to make as many connections with other Hispanics and Mexicans as he can while at App State.

“I will continue to, like, show that I am Mexican and try to make those connections with other people who might feel a little bit more, I guess, put to the side or a little bit silenced,” Ruiz said.

Ruiz said he believes there are some misconceptions about the Hispanic/Latine community, especially when it comes to communication.

“It’s a misconception to believe that just because one can’t clearly, 100% understand you, or English is their second language, it takes away their ability to do something,” Ruiz said. “Hispanic, Latinx people are very capable.”

“Every single Hispanic person I’ve talked to has been educated. Whether it’s traditional education or a different form of education, they know what they’re talking about,” Ruiz said.

From science to communications to language courses and even admissions, within the departments and jobs at the university lies the Hispanic/Latine workers that help run App State.

Carlos Montero is a Practitioner-in-Residence for AppTV, and teaches electronic media/broadcasting. Born in Buenos Aires, Argentina, the anchor and journalist has a deep rooted history in Boone.

Montero is a graduate of App State with a bachelor’s in communication broadcasting and journalism, during his time in school he recalls several events that made his experience “great.”

During his first semester as a transfer student from the University of Buenos Aires, Montero said he came in January while it was snowing and had trouble finding his classes. Everyone he asked for directions was “so friendly” and “extremely nice.”

During his spring break he found his dorm was closed and he had no place to go, he met a “sweet” girl from Raleigh, who took him into her family’s home and wanted to show him what a “real American Thanksgiving” was like. On the first night in her home the girl had told her mom to prepare a meal to make Montero feel at home, they fed him nachos and other Mexican food.

“We don’t eat Mexican food in Argentina. Argentina is so far away from Mexico,” Montero said, recalling this memory.

While Montero met a lot of friendly people during his time as a student, he said the friendliest person he met at App State was his wife, who he’s been with since.

His two children are also App State alumni, he said he gives his students advice and talks to them how he’d talk to his own.

“I try to help them believe in themselves, that they can make it, and to dream high,” Montero said.

Hally Chirinos is an assistant director of Hispanic/Latine recruitment for university admissions. She said she’s still building her cultural identity and learning about her culture as a Honduran and Salvadoran.

Chirinos said she’s faced instances in which people assumed she’s not educated just because she speaks a different language and they get surprised when she can speak English without a struggle.

“It’s just really interesting to have those interactions,” Chirinos said.

However, Chirinos said she’s found community by reaching out, networking, participating and staying connected to people within the Boone Hispanic/Latine community.

Renata Carneiro is a Brazilian assistant professor in the chemistry department. She’s lived in the United State for six years, and has lived in Boone for one.

She believes a misconception about the community is that people assume Hispanic and Latine are the same thing. Although the terms are sometimes interchangeable, Hispanic refers to people of Spanish-speaking descent, while Latine refers to people who come from or descended from South America, Central America and the Caribbean. People from Brazil are not Hispanic, and people from Spain are not Latine.

Carneiro said there are also stereotypes about Latina women that are not true.

“There’s a tendency to think that we are easy, we are here to find husbands, to you know, find a green card,” Careino said. “I’ve been in situations, very uncomfortable situations, where people would bring those things.”

Over the years, Carneiro said she has come to embrace her accent, which she used to be insecure about. As a way of displaying her pride and educating others about her culture, Carneiro said she tries to introduce Latin elements into the classes she teaches.

“It carries my background and I’m proud of it,” Carneiro said.

Despite the differences in occupations, nationalities and experiences, the community not only tries to stay connected with their culture, but they try to bring it to Boone as well. As one of the fastest growing populations in the United States, the Hispanic/Latinx community in Boone is bound to grow, and with that, comes their heritage as well.