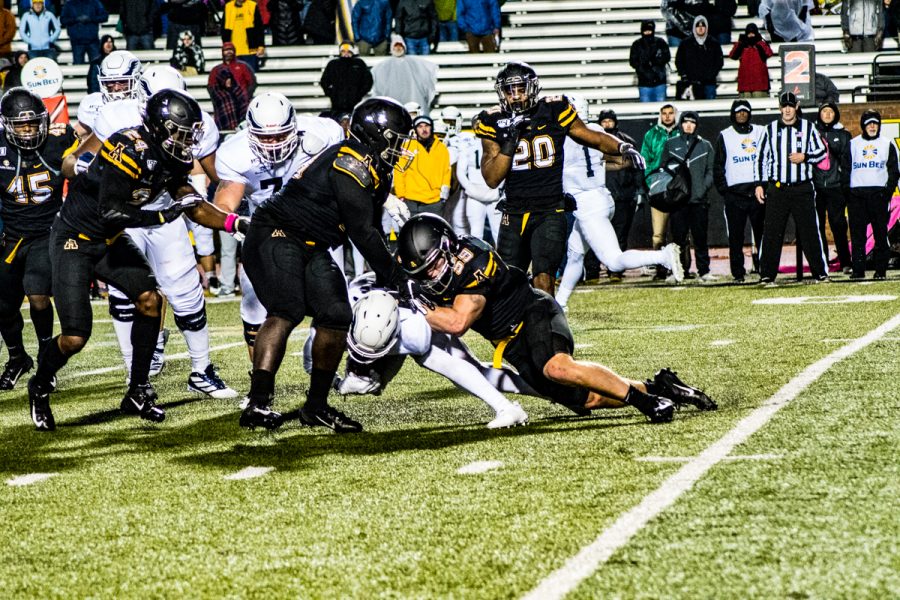 Making an impact: Football captain Jordan Fehr leads on and off the field

After establishing himself as a household name during his first three years in Boone, senior linebacker Jordan Fehr is making his last season his best yet.

Despite being selected to the Preseason All-Sun Belt First Team and accumulating 171 total tackles in his career thus far, anyone who knows Fehr will say that he’s an even better man off the field than a player on it.

“He’s a great young man and a guy you can trust,” said defensive coordinator Ted Roof . “When he tells you something, it’s from his heart, and I respect that.”

Fehr was born in Delaware to Kevin Fehr and Heather Garfield. Early on, his family bounced around the Northeast because of his father’s job. When he was 6 years old, Fehr found himself living in New York, where his football journey began.

“I just love hitting people, so when I was in New York, I started at the age of 6 and that was tackle football,” Fehr said. “Normally, you play flag football, but I went straight into tackle football just because I love to hit and run around.”

In the third grade, Fehr’s parents divorced, causing a move to Charlotte, where Fehr lived for the rest of his childhood. Even though Fehr spent many years of his childhood in the Northeast, he calls Charlotte home.

“I wasn’t born in Charlotte, but I was definitely raised in Charlotte. I love Charlotte,” Fehr said. “It was a great environment, and there are lots of fun things to do down there. I mean, everything you can imagine; it’s a huge city.”

Fehr was brought up in a Christian household, where his faith was important early on. The values he watched his parents embody soon became his own. Once reaching college, Fehr remained steadfast in his faith and attributes it as a main cause for who he has become.

“My faith has only grown since I left home, which I feel is kind of rare. Statistics show it’s usually the opposite,” Fehr said. “Dealing with football and all the stuff you have to go through as a student-athlete, I turned to my faith, and it has made me a much better man. I try to continue to live very faithfully and God-like through Him.”

Coming out of high school, Fehr received a two-star rating from Rivals.com, Scout.com and 247Sports. Fehr said he felt under-ranked. This only fueled the intense work ethic and drive instilled in Fehr early on.

“I was definitely very overlooked, and I love that. I love being the underdog,” Fehr said. “I just continue to work as hard as I can every day to try to be the best I can be. I don’t care what people have to say about it. I’m just going to stick to what I know and continue to try to outwork everyone.”

When it came time to make his college decision, it was a no-brainer for Fehr. Not only did he love to visit the mountains to snowboard in the winter, but it was a near perfect midpoint between his father, who lived in Nashville, Tennessee, and his mother in Charlotte.

“App State really felt like home. It kind of just felt meant to be,” Fehr said. “They recruited me very heavily since my sophomore year and they were always there. I had a great relationship with the coaching staff, and every time I came up here, I would love it. It just felt right. If I could go back, I would do the exact same thing.”

Over the past four years, Fehr has accumulated too many memories to recall but points to two in particular as some of his favorites with the team.

“Winning the Sun Belt Championship last year at home, the inaugural one, was pretty cool,” Fehr said. “Beating Carolina this year was pretty cool, too. I have a lot of great memories on and off the field with all the guys I’ve gotten so close with, so it’s been an awesome experience.”

Meanwhile, the Mountaineers are off to a 8-1 start in Fehr’s senior season, with aspirations of a Sun Belt Championship and an outside shot at New Year’s Six Bowl bid still intact.

“He’s accomplished a lot in his career here thus far, but there’s a lot more in him,” Roof said. “It’s my job and a partnership with him to pull that out of him so he can achieve what he desires to achieve.”

In December, Fehr will graduate from App State with a degree in business management and a minor in advanced entrepreneurship. He said he plans to sign with an agent and pursue his dream of playing in the NFL.

“If I make it, awesome, I’ll go live my dream. If I don’t, I’ll have a degree, and I can go work and settle down as I start the next chapter of my life,” Fehr said. “I’m excited for it.”

The Appalachian • Copyright 2023 • FLEX WordPress Theme by SNO • Log in